It was a long mission undertaken by the rich of the European aristocracy starting from the seventeenth century destined to perfect their knowledge: The destination was Italy.

THE ITINERARY IN THE ROME OF TIME

The places of the Grand Tour in Rome
Thinking of Rome, many people may not realize to get lost in its alleys, perhaps doing some Shopping. For this reason, the so-called Trident (Consisting of the intersection of three main streets Via di Ripetta, Via del Babuino and Via del Corso) and the respective neighbouring areas including Via dei Condotti and Via Frattina are very famous overseas.
Admiring the boutiques, many may not realize that they are walking in history, but not only because Rome is an open-air museum but also because among the many people who walked on its cobblestones there were also many writers and personalities from the 1600s and 1700s. epoch.
Going back in time we could say that Piazza del Popolo was the official entrance to the city from the North from the Via Flaminia, who came here up to 1700, found himself in front of a much smaller square and without the lateral exedras and the central fountain, later work of the architect Valadier.
Among the personalities of the time who passed through these streets and of whom we also have many testimonies, we find Goethe who in his “Journey to Italy”, wrote a hymn of gratitude to the Eternal City:
«Rome is the capital of the world! In this place the entire history of the world is linked, and I count on being born a second time, of being truly risen, the day I set foot in Rome. Its beauties have raised me little by little to their height. ”
In the historical period mentioned above it was common to travel to Europe and especially to Italy for the cultural and artistic training of the person, this habit of the time was called Grand Tour, which was of undefined duration and had the same city of departure and arrival.
Johann

From 1824 to 1948 the building had been owned by the Bracci family for over a century, descendants of the sculptor Pietro Bracci, then on May 30, 1997 the “Goethe House” opened there, which is the only German museum abroad with the aim of remembering with exhibitions and cultural events the famous guest of Rome. The rooms of the permanent exhibition tell the story of Goethe’s Italian journey and his stay in Rome with letters, paintings, drawings, books and historical documents. 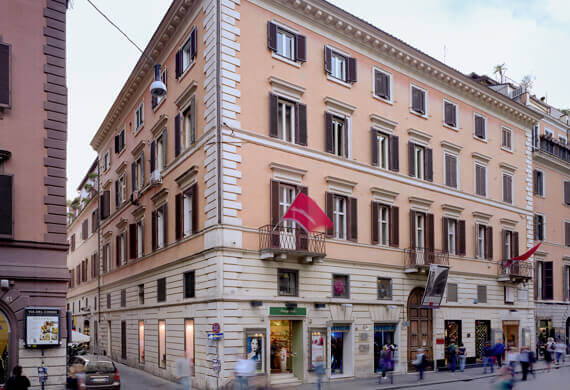 Along the neighbouring street to the left of Via del Corso called Via del Babuino, in a side street we find the famous Via Margutta which housed numerous shops of artists and artisans, but also cafes and bars very popular at that time.

The coffee most loved by travellers, however, was undoubtedly the Caffè Greco, located in via dei Condotti n. 86: built in 1760 at the behest of a certain Nicola della Maddalena, it is undoubtedly still today an undisputed memory of the city. The first news on the Caffè Greco can be seen in the State of Souls of 1760 in which a “Nicola di Madalena coffee maker” is the manager and perhaps also the owner, since it is also reflected in a document from the parish of San Lorenzo in Lucina and kept at the “Archive of the Vicariate”. The first sure testimony on the Caffè Greco is attributed to Pierre Prud’hon, who mentions it in a letter to his friend Jean Raphaël Fauconnier, quoted by Cesare Pascarella. 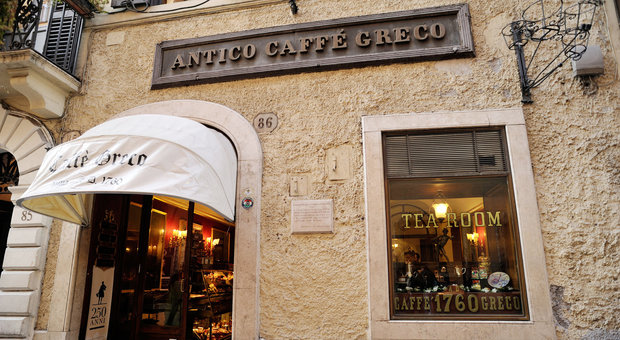 It was frequented by many intellectuals of the time, both Romans like Trilussa, and from all over the world. Among the best known names, we can remember Stendhal, Goethe himself, D’Annunzio, Joyce, Keats and Shelley. And these two young English poets, as well as Lord Byron, were among the group of intellectuals who chose Italy as the destination of their training and study. 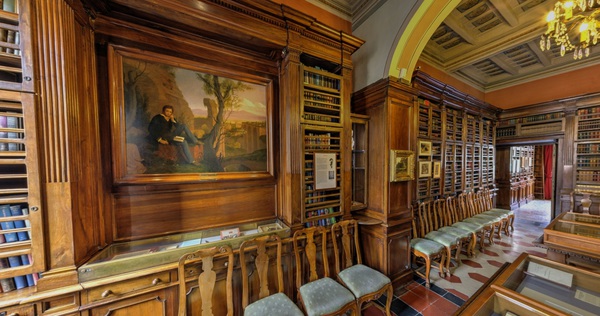 In fact, to the right of the splendid Spanish Steps, stands the House Museum dedicated to Keats and Shelley, the last home of John Keats, who died there in 1821 when he was only twenty-five years old.
The exterior of the building is similar to how it was when Keats arrived in Rome in a vain attempt to slow down the inevitable consequences of tuberculosis. Opened to the public in 1909, this house museum contains a rich collection of paintings, sculptures, manuscripts, objects and first editions of the works of Keats, Percy Bysshe Shelley and Lord Byron, the most important exponents of the second English romantic generation.
In reality, as was the case with Goethe, the choice of this building was not accidental since the area was frequented by many Englishmen, but not only given that in Piazza di Spagna, as the name itself implies, the Iberian colony was in fact very numerous. It is no coincidence that in a corner of the large square is the beautiful building that now houses the Spanish Embassy to the Holy See. But there were also many French, who had important possessions here for many centuries, such as the precious church of Trinità dei Monti.
There were also many inns and hotels in the area: just near Piazza di Spagna there was the Hotel de Londres, at the climb to San Sebastianello and the Locanda Maison Serny, whose family also managed the Hotel d’Inghilterra in Via Bocca di Leone.

It becomes one of the most popular hotels for travellers on the Grand Tour and for the first traveling king of Portugal, Don Pedro II, remembered with a special plaque at the hotel entrance. The Hotel d’Inghilterra
boasts silk tapestries from the historic San Leucio silk factory, present in Rome in the Green Room of Palazzo Chigi and in the reception hall of Villa Taverna.

In Piazza Mignanelli, on the other hand, next to the ramp, the inn which later became La Grand’Europa Hotel; on the other side of the Mignanelli ramp, a tavern and a trattoria, progenitors of the current Alla Rampa restaurant. At the corner of Via dei Condotti, at numbers 77 and 78, the Albergo d’Alemagna opened its doors, run by the Roesler Franz, the same family who generated the famous watercolorist Ettore Roesler Franz, author of splendid views of a now vanished Rome. We conclude our journey precisely in the streets of the Grand Tour in Piazza di Spagna at number 23. Here we find another prominent place called Babington’s, the first tea room opened in the city on behalf of two enterprising English ladies, still today a destination for Romans and tourists. In 1893 two young English ladies of good family: they were Isabel Cargill, daughter of Captain Cargill, founder of the city of Dunedin in New Zealand and Anna Maria Babington, descendant of that Antony Babington hanged in 1586 for conspiring against Elizabeth I. The two young people decided to invest their savings (100 pounds) by opening a tea and reading room in the capital for the Anglo-Saxon community. The business involved considerable risks, especially because in Italy it was not common to drink tea, which was sold only in pharmacies at the time. The Babington’s tea room was an immediate success both because Italy was the destination of the Grand Tour for the British and because it was part of a Rome that celebrated the Jubilee and the silver wedding of the royals Umberto and Margherita and in which garments flowed of state and exponents of the aristocracy and the beautiful international world. Babington’s was initially opened in Via Due Macelli and one year after its opening it was moved to Piazza di Spagna, in the so-called “English ghetto”, inside the prestigious eighteenth-century building adjacent to the Spanish Steps.

This site uses Akismet to reduce spam. Learn how your comment data is processed.